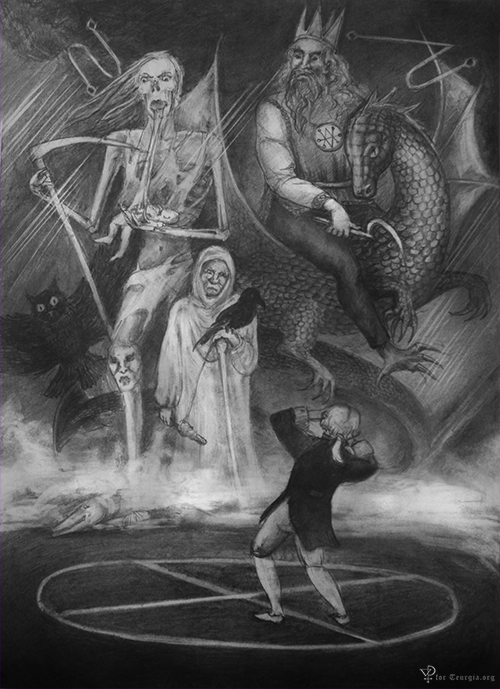 We introduce our second English update. The update illustrates a picture in which the magical images of the Spirits of Saturn are depicted according to the book “The Elementary Treatise on Practical Magic” (“Traité élémentaire de magie pratique”) by Dr. Papus. A description of the appearance of the Spirits of Saturn according to Papus's “Practical Magic” can be found in this article.

The articles in this update focus on the history of Martinism, occult philosophy, mysticism, magic, astrology, and the difference between black magic and witchcraft.

In this update, for the first time, we are publishing one of the materials from the Teurgia.Org collection of rarities: this is a scan of a letter with medical prescriptions for the treatment of a patient, written by Dr. Papus (Gerard Encausse). The original letter is in French, we decrypted and translated it into English.

We express our gratitude to Margherita Fiorello, a magnificent traditional Western astrologer, for her permission to publish her articles on our portal. In this update, we publish her material on fixed stars and temperament.

History of Martinism
A medical prescription written by Dr Papus: rare document
This is the first scanned material from the collection of rare documents of Teurgia.Org. This is an original prescription written by Dr. Papus for treating one of his patients. The recipe states the need for the use of homeopathic methods, as well as the presence of an occult effect on the patient. The original document is in French. We translated it into English.

Mysticism, Magic, Theurgy and Magism — Baal-Hiram
This article is about difference between magic and Theurgy. The author also talks about Mysticism and Magism, Ceremonial Magic, Spiritual Alchemy and other related notions, giving their definitions.