Many occultists, especially Christian and Papus, dealt with the correspondence between the Major Arcana of Tarot, on the one hand, and the planets with the zodiac signs on the other. Oswald Wirth even made, based on this correspondence, an interesting pentacle in which he introduced, however, also some extra-zodiac constellations.

Based on my personal experience, I also compiled a table of adaptation of the Tarot to Astrology. I am sharing it only in the form of an imperfect draft and do not pretend this to be without infallibility at all.
As you know, modern Astrology deals with 9 planets and 12 zodiac signs, which together gives us the number 21, i.e. exactly the number of the Major Arcana, not counting the 0 Arcana.

But before moving on to the correspondence between Tarot and Astrology, it is necessary to say a few words about the symbolism of the planets and zodiac signs.

The planets are: Neptune ♆, Uranus ⛢, Saturn ♄, Jupiter ♃, Mars ♂, the Sun ☉, Venus ♀, Mercury ☿ and the Moon ☾ (the Sun is also considered to be a planet, because Astrology, not at all denying the rotation of the Earth around the Sun, takes the position of celestial bodies from a geocentric, not from a heliocentric point of view).

The signs of the zodiac are: Aries ♈, Taurus ♉, Gemini ♊, Cancer ♋, Leo ♌, Virgo ♍, Libra ♎, Scorpio ♏, Sagittarius ♐, Capricorn ♑, Aquarius ♒ and Pisces ♓.
Astrological signs of the zodiac should not be confused with astronomical constellations along the ecliptic, bearing the same names.

In astrology, zodiac signs denote zones of known influences located along the ecliptic. Each sign or zone has size of 30 ° starting from the 1st degree of Aries, which is the intersection of the ecliptic with the celestial equator.

Astrologers believe that each planet rules one or two signs of the zodiac, and this correspondence is expressed in the following table.

Uranus and Neptune have not yet been assigned certain zodiac signs, especially since, according to modern astrologers, they only supplement the old planets and start the highest octave of the planets corresponding to: Uranus – Mercury, and Neptune –– Venus, but only on a higher plane.

Fire signs signify will and initiative.

Generally, the cardinal signs mean an active principle, fixed signs mean a passive principle and mutable ones mean combination of the first two and equilibrium in motion.

The symbolic meaning of the planets and zodiac signs, in the most general terms, is as follows.

Neptune gives the unusual and fantastic feelings. On the one hand, Neptune connected to mysticism, on the other,- to anarchism, and at the highest levels it gives deviations in sexual feelings.

Uranus gives an unusual way of thinking. Under his influence, wonderful inventions have been made. Also, Uranus gives talent for higher mathematics (Lobachevsky) and for occultism, and very often it gives eccentric behavior. It causes sudden and unexpected upheavals in life.

Saturn means coldness and slowness. On the one hand, it gives a penchant for solitude and asceticism, a depth of thought and perseverance in work, and on the other hand, it might mean egoism, stinginess, gloom and indecision.

Its signs are Capricorn and Aquarius. The daily sign Aquarius gives a tendency to thinking, and the night sign Capricorn gives perseverance in the pursuit of wealth and power.

Jupiter gives cheerfulness, complacency, ambition, as well as vanity and love for showing off.

His daily sign Sagittarius means the manifestation of spiritual aspirations in the physical world. It gives religiosity and a penchant for preaching, but also a love for ceremonies and, among other things, a passion for hunting and sports.

His night sign Pisces gives the type of person who is said to be his own enemy. At the highest levels, it means self-sacrifice, and at the lower, carelessness.

His daily sign Aries gives initiative, energy, courage and generally a tendency to pioneering, but also disorder, and dispersion.

His night sign Scorpio gives a strong character that will always push person out of the crowd, for the good or for the bad.

The sun gives spiritual light, a love towards arts, authority but also pride.

His sign Leo gives an expansive vitality and ability to organize, but also arrogance and passion.

Venus is a planet of love in all possible ways.

Her day sign Libra gives harmony, love for humanity and mercy, but also a weakness of character.

The moon symbolizes motherhood and the productive forces of nature. It gives dreaminess and romance, but also impractical and apathy in real life.

Her sign Cancer gives impressionability, sensitivity and affection for the family, but also, on the one hand, exaltation and thirst for popularity, and on the other, shyness and timidity.

Based on these abovementioned information, I think it is possible to establish the following correspondence between the Major Arcana of Tarot and astrological signs. 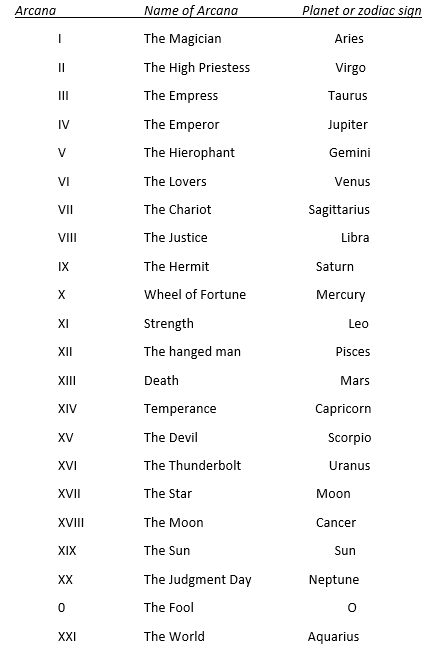 It is interesting to note, that there are indications of a connection between Tarot and Astrology even in the way the gypsies do divination.

According to the Spanish grimoire “ei libro negro’’, first the cards are laid out on 12 piles, the value of which is exactly the same as the value of 12 astrological houses in the horoscope, and then these piles are divided into four groups: 5-9, 6-10, 7-11 and 8-12, which in the horoscope will correspond to its four main trigons (arc of 120 °).

In conclusion, we attach a general table of Tarot and its correspondence with Astrology. 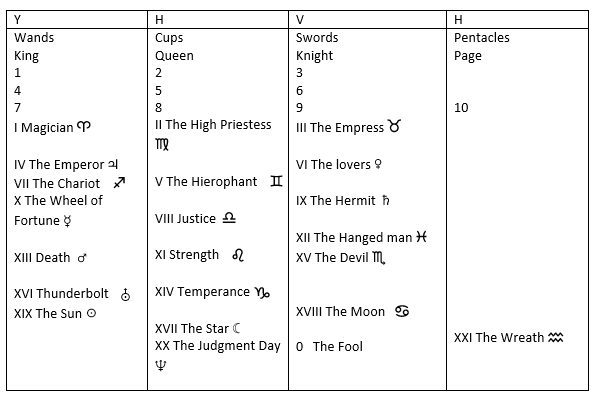